We’re finishing up the week with one last quick look at a model that comes from our 1/24th scale Special Edition line, the die-cast Ford Mustang Boss 302! This vehicle can be found in a stunning Dull Black and White color combo along with its Orange variant that can also be found on store shelves for those who are looking to add it to their collection as well. In terms of features, you’ll find that the Boss 302 still supports an opening hood, along with a set of opening doors to allow even further exploration of its detail! To find the Ford Mustang Boss 302 or any of the other models in our Special Edition line-up at your local retailer, keep your eyes open for our standard Maisto packaging color-coded Blue and labeled Special Edition!

MONTEREY, Calif., Aug. 13, 2010 – Ford gave the green light only once before: In 1968, management approved a special Mustang – a car that sacrificed nothing in its quest to be the best all-around road-going performance machine ever created by Ford Motor Company. That car became the 1969 Mustang Boss 302, and it remains one of the world’s most sought-after examples of American performance.

Forty-two years later, Ford has given the green light again.

The team of Ford engineers, designers and stylists – all Mustang enthusiasts to the core – that created the groundbreaking 2011 Mustang GT has distilled a new model to its purest form, strengthening, lightening and refining each system to create a race car with a license plate. Its name: the 2012 Mustang Boss 302.

“The decision to build a modern Boss was not entered into lightly,” said Derrick Kuzak, group vice president, Global Product Development. “The entire team at Ford felt the time was right and with the right ingredients, the world-class 2011 Mustang could support a successful, race-bred, worthy successor to the original Boss 302. For us that meant a production Mustang that could top one of the world’s best – the 2010 BMW M3 – in lap times at Laguna Seca. We met our expectations.”

To celebrate the racing heritage of the new Mustang Boss 302, Ford will also offer a limited number of Boss 302 Laguna Seca models, named for the track where Parnelli Jones won the 1970 Trans-Am season opener in a Boss 302. Aimed at racers more interested in on-track performance than creature comforts, the Boss 302 Laguna Seca has increased body stiffness, a firmer chassis set-up and an aerodynamics package carried over almost in its entirety from the Ford Racing Boss 302R.

here is a short video on the new Boss:

And of course, some pix for you: 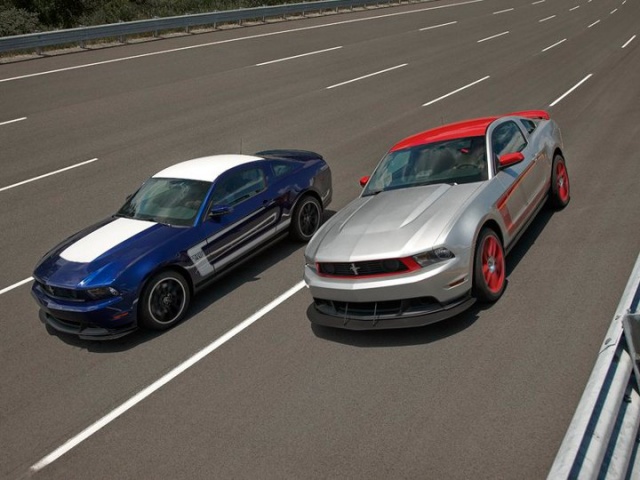 And yes, friends, this will be available from us next year.